I just had a sip of Manischewitz wine, expecting to have a bit of warmth and sweetness before calling it a night. As the sweetness turned into a glow, there came a rush of memory. I was suddenly a little girl again, maybe 4 years old, or even smaller, sitting at a big noisy table where my parents and grandparents and brother were all gathered for a holiday dinner. Those times were always so special to me: all my favourite people together in our home, even though it really was all so busy and hard to really take in everything that was going on. But there was the simplicity of that ritual we always had, whether it was Passover or Thanksgiving: the Manischewitz wine.

I think my Grandma Dot had a lot to do with insuring that it was served, it was her ‘very best favour’ as she would say, as she took the first sip and became all smiles and more child than adult. I felt little, and loved and happy. At an older age, when we might have had these gatherings with other families and there was a ‘kids’ table’, we could get as giddy on the sweetened wine as we liked. It didn’t take much more than a few stolen sips to make us giggle and howl with laughter and feel our oats at our own festive table.

This leads me to think about the Torah’s Joseph and his family, the subject of next week’s portion, Vayeitze, found in Genesis 28-32. I wondered, did Joseph and his brothers sit around their festival table and partake of sweet wine, too? Did they also become giddy and silly together like we did? Could all the differences amongst them, the jealousy for Joseph, become blotted out as they took this truce time to indulge in sacred moments of gathering together? 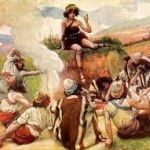 I read the story and wonder how hard it is for the family of a visionary like Joseph to let go of their fearfulness for his differences and recognize his unusual ways as gifts, instead. Joseph was different in appearance, both beautiful physically and also to look at, and also in how he engaged with the people and world around him. He did not allow himself the usual social inhibitions in showing what his gifts were, in how he perceived the world through not only his dreams, but also the dreams of others.

Joseph was a tattle-tale. He had the habit of exposing his brothers’ foibles to his father, who seemed to reward him for his forthrightness with a special coat. There is no definitive translation for the Hebrew words given in the Torah for this coat: כתונת פסים can be translated as a coat that extends to the wrists and ankles like a great coat, or it can mean a coat made of many strips of fabric. Most commonly it is translated as a ‘coat of many colours’. All of these nuances tell us something similar about the coat and the status it conferred upon Joseph, especially in his brothers’ eyes—that his father gave him the honour of favoured greatness. 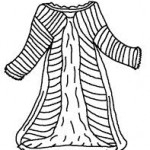 How is it then that the father can see this emergent prescience but not the siblings? The strangeness of Joseph’s ways must have been an annoyance to his brothers who had to endure his tales and dreams and his perceptions of them from a dimension they had

not yet reached. Or perhaps, it was that they had left behind their own natural pre-verbal abilities to perceive information intuitively by choosing to accept instead the structured external social systems of their clan and tribe. It is natural to fear someone who does not conform to the safety of the agreed upon social norms. The boundary between intuitively gifted and mentally ill are often confused, the similarities being the discomfort afforded by others due to the unpredictability or unconventionality of the gifted or ill person.

Other ways this might be expressed are gender differences. Perhaps the story of Joseph’s travails is a torah or teaching about homophobia or gender difference: after all, Joseph is hinted at as being rather effeminate by being beautiful of physique and to look at, not a particularly industrious shepherd, and is given a flowing robe by his father who dotes on him and rejects the advances of Potipher’s beautiful wife. These characteristics stand in contrast to how his brothers were and set him apart from them, creating the purpose for their plot to be rid of him and his outsider way of being.

It takes many years and much travail before he is settled and enabled to use his intuitive talents without retribution, as Pharaoh’s right hand man. And eventually his siblings, in their time of need, must come to him for aid. In what could have been a moment of ultimate revenge, Joseph instead remains loyal to his gifts and powerful abilities, and takes care of his clan.

I know this story began with a sip of wine a short while ago, but it is a memory that I believe we all carry. When was the last time you could let go into the reverie of childhood bliss, taking in whatever joy was surrounding you? Laughing together in gatherings without care, even if you don’t really know all the backstories in the room? Or listening without fear to your own joyous heartsong?

Joseph wasn’t a complete person as a youth. He needed those years of learning to navigate the reactions of others in order to become effective at being heard. Only then could he express his gifts to their fullest, as chief advisor for a powerful nation. In this story we get the chance to see how sometimes the youthful rawness of beauty and truth may need time to mature and ripen before it can be accepted. This takes patience and time, but eventually an adult can smile and look back at those wonderful moments of sweetness and warmth and give that giddy child a knowing hug and a wink.